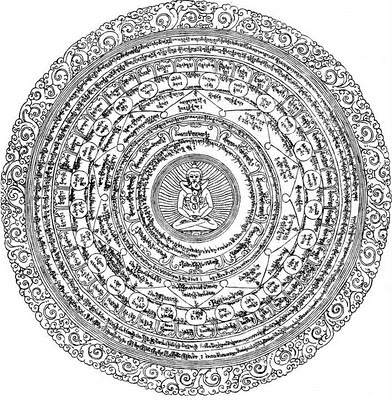 We possess the tathagata-garbha, the enlightened essence which is like pure gold, but we have fallen into confusion which is like gold becoming tainted by impurities. This is what needs to be purified on the Path. Similarly, possessing the deities of the three bases of completeness is like possessing pure gold, but not recognizing it as such is similar to our gold being concealed by impurities.

So what must we do? We need to clear away the impurity that conceals the gold which is possible through practice. If we weren’t already endowed with this pure gold, but instead possessed mere brass, we could polish and clean as much as possible, but the brass would never turn into gold. Nevertheless, since we already have a divine nature, then if we engage in the development, recitation and completion stage practices, which act like a polish, we can realize what we actually are.

If we have a piece of wood and we clean and polish it, will it ever turn into gold? No, that is called ‘regarding something to be what it is not.’ Here, we are talking about regarding things to be what they actually are. Since we already possess the enlightened essence, if we practice on the path of development, recitation and completion, then we will definitely purify our obscurations and truly realize the dharmakaya.

In short, the main focus of the practice is that the world around us, whatever appears and exists, is a celestial palace while the male and female sentient beings are all dakas and dakinis. All sounds are mantra, and all thoughts and emotions are pure wisdom. This is the key point of this drubchen, the great accomplishment - pure sights, sounds and awareness. This means whatever we see with the eyes is the pure form of the deity, whatever we hear with the ears is the sound of mantra and whatever we think, all thoughts and mental activity, is actually the enlightened Vajra Mind, the self-existing wisdom. This is what we should keep in mind.

In our heart-center are the forty-two peaceful deities, and their combined mantra is: om bodhichitta maha sukha jnana dhatu ah. The essence mantra of the fifty-eight Herukas, the wrathful deities in our crown-center is: om rulu rulu hung bhyo hung. And the essence mantra of all the other deities combined into one is om vajra satva hung, or more commonly: om vajra satva ah.